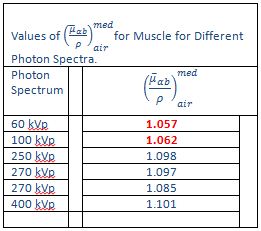 Dose deposition to a medium may only be directly measured by the method of calorimetry. However, this is not what we do in practice. What is usually done is that we use an ionization chamber of some kind to measure exposure and then apply a series of correction factors in order to derive dose values corresponding to the measured exposure.

In reality, ionization chambers measure exposure which is related to the ionization (release of charge) happening within the gas in the chamber. The commonly used gas in such chambers is air. So, what we do as a first step is measuring the exposure and applying a suitable correction factor to turn exposure in air to dose* to the air within the chamber. The coefficient needed for that is described by the equation:

The roentgen is also connected to the more modern unit for ionization (C/kg) with the equation:

In order to get more information about the relationship between absorbed dose and exposure please refer to the book: The Physics of Radiology, Fourth Edition. Harold Elford Johns, John Robert Cunningham. See paragraph 7.07.

Some ionization-chamber-based dosimetry systems may be set to return dose values to the user. In such a case the above procedure is already built-in to the system. From the above discussion it must be clear why we usually refer to dose measured in air when an ionization chamber is used.

Next step: Calculation of dose to a medium (such as a phantom, human tissue or other)

If we want to calculate the dose deposition to a material other than air. We need to use another set of coefficients. These coefficients are derived through the “cavity theory”. In fact what we do here is convert the dose to the air (calculated in the previous step through measured exposure) in dose to the medium in question.

In short, for media in photon beams the theory goes as follows (see page 107 of the book: Handbook of Radiotherapy Physics: Theory and practice. Mayles P, Nahum A and Rosenwald JC, Editors. CRC Press 2007):

“In all practical situations, there will be a spectrum of photon energies. This will be true even for a monoenergetic photon source as scattered photons of lower energy will be present at a depth z in the medium. The dose ratio is then given by (Equation 1):

This ratio, often written in shorthand form as (Equation 2):

Here the mass-energy absorption coefficients have been averaged over the photon fluence spectra.

Depending on the spectrum of the photon beam and the medium where dose needs to be calculated the coefficients μen/ρ of materials and their ratios are different. Such coefficients may be found in textbooks such as the “Physics of Radiology” mentioned above. An online version of them is provided by the US National Institute of Standards and Technology (NIST) http://physics.nist.gov/PhysRefData/XrayMassCoef/tab4.html. The tables provided by NIST tabulate the coefficients for different photon energies.

Remember that it is imperative to find the correct set of coefficients corresponding to the right spectrum and then calculate their ratio. This could be a little difficult for x-ray beams in radiology since the spectrum is not monoenergetic.

In the book “The Physics of Radiology” the authors have adopted another equivalent form of the above equation (notation is slightly different as there is some notation non-uniformity around the literature. Please note that μen is the same as μab air refers to the medium of the detector which is noted as det in the previously used notation):

The following data are taken from table 7-4 of the book: “The Physics of Radiology”: coefficient ratios for different x-ray spectra for muscle and air are provided:

The coefficients in the above table would be used with equation 2 in the following way:

The factor will be different for different materials. Also filtration changes the spectrum of the beam and could introduce difficulties in selecting the correct ratio.

The above example proves that caution is needed to make sure a comprehensive set of coefficients and equations is selected.

For a free and credible overview of dosimetry please see chapter 2 of the book sponsored by the International Atomic Energy Agency (IAEA) and endorsed by other major organizations (you may download the book in PDF):

Another online resource reiterating most of the issues. Click Here

For more information about mass-energy absorption coefficients for beam qualities used in radiology please refer to the following publication:

*Air kerma and its differences from dose is not discussed in this post. The interested reader may digg deeper into the concepts involved in dosimetry and their implications (or maybe complications) by reading through 5th-7th chapter of “The Physics of Radiology” textbook.