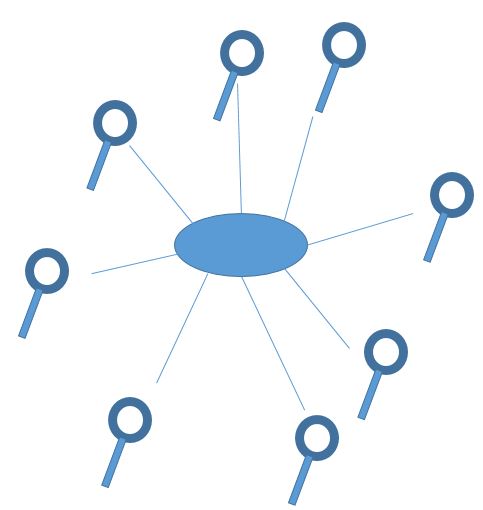 I started writing this post a few days ago after reading this article. It looked extremely interesting. The main idea is that in the Boston marathon there were thousands of mobile phones taking pictures and videos. The total duration and number of all videos and pictures shot could be stunning. This could be equivalent to thousands of witnesses testifying with absolute accuracy what they saw. The author was wondering whether crowd-sourcing could become a tool to crime solving. She probably meant to write modern crowd-sourcing as some forms of crowd-sourcing have been in use since long time ago as we will see further below.

It was reasonable to expect that the authorities would like to collect and use all available material that could help them in their efforts to find the people responsible for the bombings. This is in fact what they tried to do. In a few days after the bombing, surveillance videos of high quality were analyzed and the authorities came up with pictures and names of suspects for the bombing. At the same time, the whole effort had already been crowd-sourced. The FBI launched a tip site for the public to contribute tips and upload media files. It has been reported that there was tremendous response from the side of the public. Efforts from other groups have also been highlighted. Reddit had launched a thread on “/r/findbostonbombers“. The Thread is no longer accessible as the bombers have already been identified.

The Boston case is an example showing the power of modern technology and communication capabilities. In this case the authorities used thousands of tips and leads as well as high quality surveillance videos in order to identify the suspects. The help of the public was also sought in order to locate the suspects. As Mr DesLauriers (special agent in charge of the Boston Division of the FBI) said: “For more than 100 years, the FBI has relied on the public to be its eyes and ears. With the media’s help, in an instant, these images will be delivered directly into the hands of millions around the world. We know the public will play a critical role in identifying and locating them”. According to Mr DeLauriers’ words some form of crowd-sourcing has been used by the FBI for a long time now. What remains to be discussed is what form could modern crowd-sourcing assume.

Let us  first see what has changed in recent years from a technological point-of-view.

What is missing is a permanent platform hosting and managing crowd-sourced crime solving cases. This platform would be something like the FBI tip-site. The effort could be backed by government and large technology companies which will provide know-how and resources.