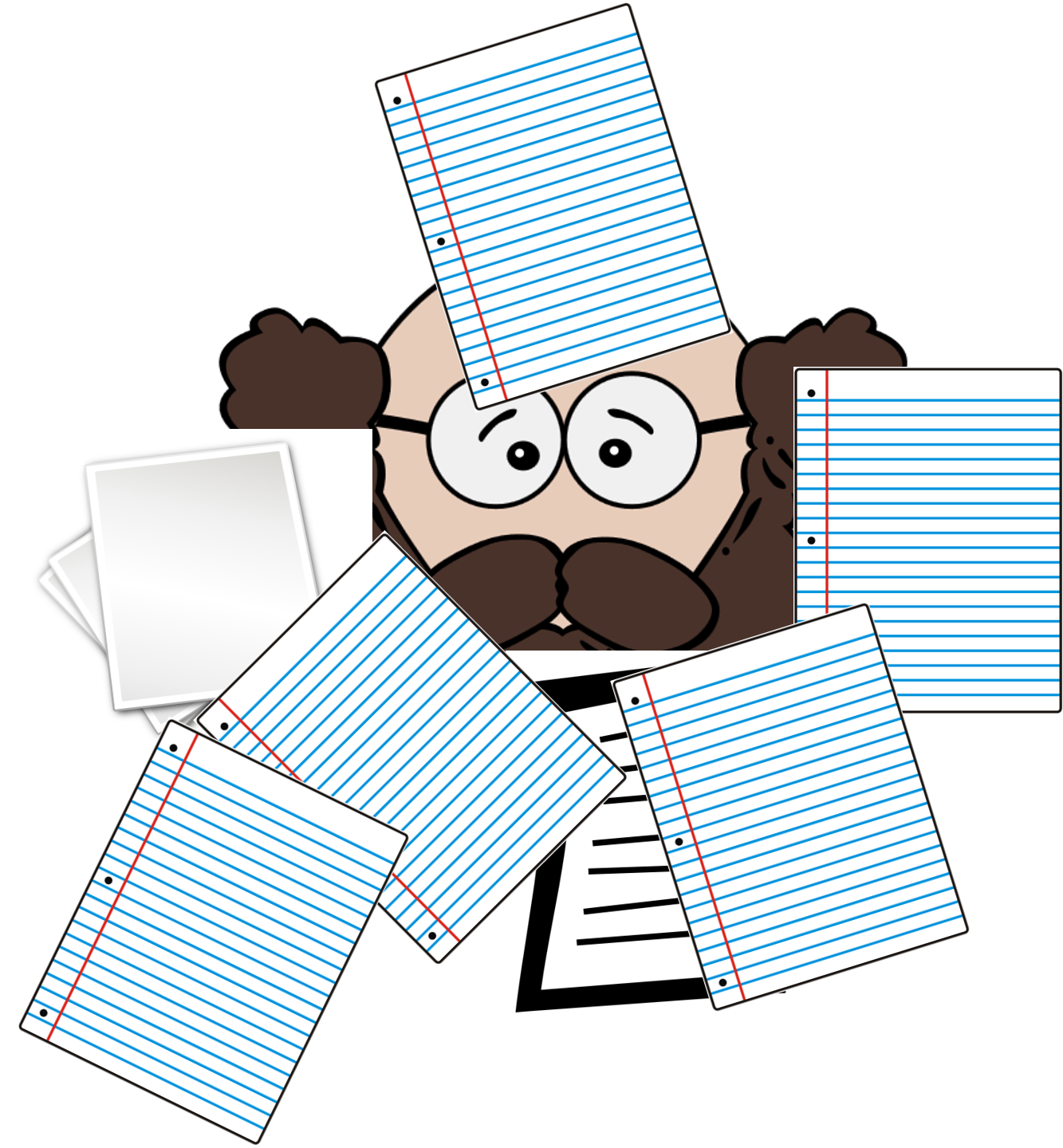 Disclaimer 1: The title of this article is purposefully exaggerated. This article has no intention to even imply that the work of a secretary is somehow inferior to the work of a scientist. It is not! I have done such work and I know that almost no secretary is as appreciated as she/he should be. Being a secretary involves a lot of strenuous work requiring a high degree of concentration and adaptability to keep up with constantly changing demands. I just think that a scientist and a secretary should be two equally valuable but also distinctly different jobs.

Disclaimer 2: The following arguments do not apply to every research group but I think they roughly correspond to the general trends observed in modern Academia.

Disclaimer 3: I am no saint! I am not trying to preach any gospel here. Having done some academic work myself my soul is also stained. Despite the exaggerated title, I believe that academic work is important. That is in fact why I took the time to write this piece. I am just trying to be critical of what I think is wrong and propose ways to improve our reality.

When I was working on my Master’s thesis I had the luxury (only now I know it was a luxury) to work on my projects all the hours of my day. I often worked more than 12 hours in a row. I had a goal. I had some questions to answer. A sense of duty towards scientific excellence was keeping me awake through the long but enjoyable night working hours. There was a clear correlation between the hours I put in to my work and the scientific value of the results. At that point in my life I pictured my potential later career as an experienced researcher. This future researcher would be very knowledgeable. Having accumulated knowledge of many years such as the one I was going through. This researcher would have such a deep and advanced knowledge of his domain of expertise that would possibly allow him to do some ground-breaking work. If at the stage of a student I was able to progress that much, how much would I progress after 10, 20 or 30 years of research work? Now I know! If I follow the mainstream career route of a researcher, I will probably not advance much as compared to my student self some years ago. By “advance”, I mostly mean to be more deeply knowledgeable, to have acquired more skills, and be able to produce higher quality work. In short, to be better at scientific problem solving.

The sense I am getting is that in general, in order to follow a career in Academia the above mentioned “advancement” is not required. This was something like a shock to me. I always thought that problem solving was the ultimate goal. However, to my unpleasant surprise I see that we have reached a state in which problem solving is not the primary goal of research. I think this is deeply detrimental for our society. It makes the social resource investment in research, inefficient. Important problems that need solving are always more than we can handle and are also pressing! But researchers do not seem interested to tackle them! Why are we not fixing this? What are the reasons for this unfortunate reality?

Let’s try to analyze the situation…

Even if a researcher wishes to produce important work (most of them really want it) there seems to be no time for this! Don’t get me wrong! I agree that incremental research has its own value and that not everyone will get to do important scientific work. But this is not what I am talking about. Even during the first steps of the scientific career available time for real scientific work drops very quickly. Administrative work starts to increase as soon as researchers finish their PhD’s.

I am not the only one thinking that there is something wrong with the way research work is conducted in the universities today. Other colleagues feel the same. In an extensive article, Mathias Binswanger argues in adequate detail how publication pressure impacts the quality of research [1]. In short, one of the main ideas in the article is that there is a disparity between published science and really important science, that would justify the effort required for its publication. He thinks that due to the pressure to publish in order to thrust their academic career forward, many researchers publish unimportant work. Having no time to spend on research work, they compete in elaborately polishing papers which describe trivial findings.

Generally, a lot of time and effort is required for any scientific work in order to reach the publication stage. This is normal and the time and effort required depend on the difficulty of the problem. What seems to be not so normal is that in many cases, the effort required for the publication stage surpasses the effort needed for the research itself. Researchers submit their work to scientific journals (most of the journals belong to for-profit companies) for free. However, competition for publication has allowed journals to provide ”formatting guidelines” to researchers, probably in order to save typesetting costs. Just take a moment to think about this!!! Different Journals require different and very specific formatting of the text and references for the submitted papers. In order to get the prestigious title of the ”published author”, researchers comply and carry out significant typesetting work for the benefit of publishing companies. This whole process requires a significant amount of extra secretarial work from the research team. The extra effort could be so much that in many groups the person who will write, submit, revise and in general oversee the publication of the paper is assigned (probably deservedly in regard to the amount of work) the prestigious position of the “first author”. The mere existence of this customary behaviour means that there are enough cases in which the work required to publish is greater than the scientific research effort itself.

I will agree that presenting research is part of the work of a scientist. I am not saying that there should be no case in which presentation of results will be a larger effort than acquiring scientific results. But we need to separate the cases in which the tediousness of the presentation is necessary from the ones in which it is required only to polish the work and make it more “publishable” with the standards of the current peer-review system. The fact that grooming a paper may improve its chances of publication is by itself a sign of a dysfunctional peer-review system. A tested method to become an academic without really providing much scientific value seems to exist! This vulnerability of the system could be part of the reason why researchers spend so much time in grooming their papers instead of conducting more important (more difficult) research.

A lot has been written about the established peer-review system. In a series of articles, Mike Taylor presents in great detail many dysfunctional aspects of the peer-review system and how the interests of publishers, researchers and the public have become clearly divergent in recent years. In short, he argues that:

The interested reader should definitely check these articles out! Another important issue that Mathias Binswanger touches in his article is that of funding of scientific projects [1]. In his opinion the hunt for funding has become a meaningless competition that misses the target. In order to quantify excellence and then fund it, governments have tried to correlate success in science with measurable outcomes. Some of these metrics are publications, third-party funding, networking with other teams and institutions. Since excellence ”acquired” tangible measures, researchers started trying to achieve more excellence in order to get more funds. I would argue that trying to quantify the value of research is going towards the right direction. I would not object to the existence of objective metrics. The problem is probably that current metrics of excellence do not necessarily correlate with better quality of research or benefit to society. We have comfortably ignored this fact, and it is the responsibility of scientists to start facing it.

This ongoing struggle for the increase of measurable indicators has led to universities which work as fundraising organizations. Early stage researchers often need to go through the bureaucracy springing from the “need” to quantify excellence. In order to secure funding for their ideas, researchers need to draft and submit elaborate research proposals through even more elaborate procedures. In general the existence of bureaucracy is justified and needed up to a point. Especially when public spending is involved. Mechanisms which secure reasonable and accountable spending should be there. However, some of these procedures are often outdated. Technology has long before rendered them unneeded. When technology is not there to automate some processes we need humans to perform tedious tasks that no-one would really enjoy (that is probably why we have so many really grumpy administrators). But when technology becomes available we ought to make our lives easier by substituting bureaucracy (and thus bureaucrats) by automated procedures. At this point there is a conflict of interest which can help one understand why bureaucracy is not exactly delighted when practical technological changes happen (that however, is another story that needs to be analyzed in another article). Practice has proven that if left uncontrolled, bureaucracy becomes self serving. It keeps generating redundant bureaucratic steps and procedures in order to justify its existence. In this sense it does not protect public wealth from misuse anymore. In contrast, it becomes the reason for ineffective and inefficient public spending.

This extra burden on the shoulders of researchers can only be to the detriment of science. From a social engineering point of view we need to redesign the process of scientific knowledge production. This form over substance approach is out of target. The above problems push research towards unreasonable directions. Instead of trying to tackle difficult problems, researchers are pushed to compete in publishing scientifically empty papers or fight with crazy bureaucratic mechanisms. We become witnesses of the phenomenon of passionate scientists trying to avoid mainstream scientific work. This is what they should do, because mainstream scientific work is not what they started out for and they feel it! The indirect cost of such misuse of human and economic resources is immense for society which relies on the effective and efficient solution of pressing problems. What can be done to improve the way research is conducted?